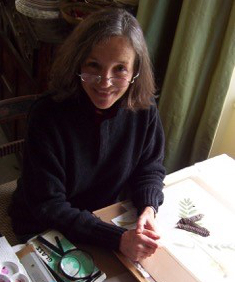 Sarah Howard is a botanical artist and writer who spent her childhood in Kenya. After graduating in African History and Social Anthropology from the School of Oriental and African Studies, University of London, in 1977, she became a journalist and researcher for two Anglican mission agencies, and undertook the archiving of the Leakey family papers in Kenya.

From 1989, after her marriage, she began commuting between Scotland and Ethiopia, running a coffee roasting business in the former, and travelling in the other. While living in Addis Ababa in the late 1990s she was illustrator to the team writing the Flora of Ethiopia and Eritrea (Addis Ababa University), a long project in 10 volumes that was completed in 2009.

Trained in botanical illustration at the Royal Botanic Garden Edinburgh, Sarah is currently working on painting projects, with an ambition to enable residents, as well as visitors to Ethiopia, to identify the flora around them. She won a Gold Medal in 2016 from the Royal Horticultural Society, London, for a set of paintings of Horn of Africa Aloes, many of them endemic to Ethiopia.

Sarah has written articles about the country, including for Selamta, the in-flight magazine of Ethiopian Airways, and for the Anglo-Ethiopian Society’s magazine.

She is a keen mountain walker and loves meeting people in their own settings.

To understand Ethiopia, read as much history as you can.  This is a country with a long written culture, and a strong appreciation of its past, whether in fact or in myth.  You will find much that has remained unchanged for hundreds of years.  Equally, current modernisation relates directly to its past.  If nothing else, you will understand better the people of Ethiopia's ancient Christian church, and be better informed about debates concerning both church and state.

The Gheralta Mountains in Tigray, Northern Ethiopia.  I was exploring rock hewn churches in the area and was unable to resist a mocking challenge in a guide book not to climb up a cliff face to a particular church, if there was any doubt about vertigo.  I did, and found myself hundreds of feet up on a narrow rock bridge leading to the church.  There, looking down, I could almost feel the sweep of angels’ wings, the tread of pilgrims’ feet and metaphor and reality became one.