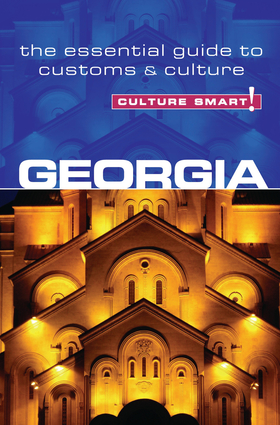 Georgia lies between Eastern Europe, Central Asia, and the Middle East, on the southeastern shore of the Black Sea. This small Caucasian country is used to playing a significant role in global geopolitics, though its strategic location at the crossroads of different civilizations has been a curse as well as a blessing. Once a battlefield of the Christian and Muslim worlds, today it is caught between its NATO aspirations and its location in Russia’s backyard.

The Silk Road, the great overland trade route between Europe and China, brought the world to Georgia. Its ancient Christian culture reflects the contributions of Arab, Persian, and Ottoman conquerors. Combined with this is a southern, “Mediterranean” feel, traces of the old Soviet legacy, and a very pronounced modern Western influence. What awaits the visitor is a unique culture dating back thousands of years.

Culture Smart! Georgia sets out to provide insights and practical tips for tourists and businesspeople alike. It will guide you through the complex realities of the country, explaining what motivates people, how they go about their daily work and social lives, their customs and their traditions—and how to relate to them.

If you are lucky enough, and you likely will be, to experience the legendary Georgian hospitality, do not empty your glass or finish the food on your plate unless you want to be offered more!